I was back at Tracey’s house last Wednesday to ride again.  This time I worked with Huskey, her gigantic dark quarter horse.  This horse was originally purchased for her husband Jim, but they quickly discovered that Huskey was just too much horse for Jim.  Since then he’s been one of “Tracey’s Boys”, and she began training him for barrels this year.  The fact that she would let me work with a horse that she’s currently training for competition is incredibly flattering.  At least with the other boys, they’re already pretty finished.  Huskey is just starting to learn. 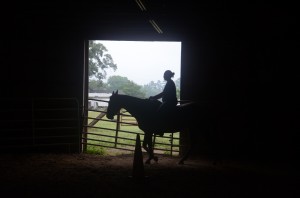 He was a joy to ride.  He’s a big guy, and I felt incredibly confident and comfortable on him.  Our friend Cat was in the arena doing some farrier work on another horse, but stopped to watch.  The first time I picked up a trot she said, “Wow!  Did you see what your legs did?” Of course, I hadn’t, because I was riding!  She said, “You just sank right into him, moved completely with him and your leg lengthened… it was beautiful!” She is trying to convince both Tracey and me that I need to take Huskey to an English show and enter an equitation class.  I’m skeptical! 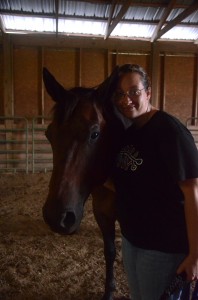 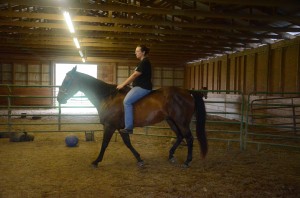 It was a really nice ride, and I look forward to working with him again.  He’s a sweet horse and really takes good care of his rider.  As it turns out, my riding him may end up helping his training along.  Since I’ve had so much experience riding hunt seat and dressage, I will be able to do some work getting him to bring his head down and frame up a bit.

After I rode Huskey, I hopped on Phoenix on a whim.  He’s a horse that Tracey’s son Sam had really liked prior to moving.  I can see a lot of potential in him, although he also needs some work.  He responds well off of leg and seat pressure, and I really think I could get him to be a cute little mover. 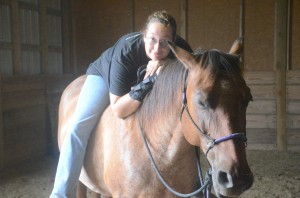 It was a great day!

In other news… I’ve begun tracking points and working out, in an effort to reach my ultimate weight loss goal that I set when I first began WW.  I’m proud to report that I’ve lost 2 pounds since beginning a week ago.  I feel incredibly positive, and as if I’m moving in a really good direction.  I’m ready to focus on this and get to that goal.

This entry was posted in Horseback Riding, Weight Loss. Bookmark the permalink.