I’ll admit it- I’ve always thought NASCAR was kind of lame.  I had zero desire to watch it on television or anywhere else.  I briefly dated a guy last year who loved racing… to the point that he could barely have normal social interaction without watching/listening to the race in the midst of it.

Last year my Uncle was talking with me about how I needed to come down to Daytona and go to a race with him.  I finally agreed, more because he is important to me than having any real desire to go to a race.  He got us tickets to the Coke Zero 400 that took place July 7th.  I was looking forward to the time with him and my Aunt Chris.

I never imagined I would actually enjoy the race itself! 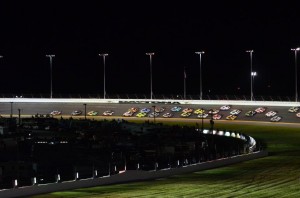 I decided, prior to the race, that I was going to root for Tony Stewart (#14).  I made this decision because his car number is an even number, the photos I saw his car was mostly red, and he didn’t look like a complete weirdo.  Very scientific reasoning.  I had almost chosen #16, Greg Biffel.  For the first 130 laps or so, I was almost wishing I had stuck with #16, because he was in 2nd place most of the time.  Then Stewart took over! 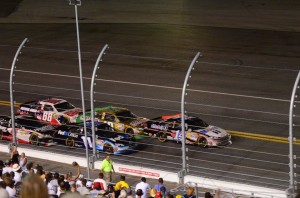 It amazed me how the cars actually touch on purpose.  It was nuts. 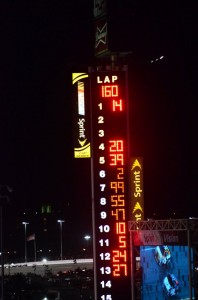 This shows that Tony Stewart WON the race.  I was so excited!!  I still can’t believe that the car I chose with no real idea of what was going on won the race. 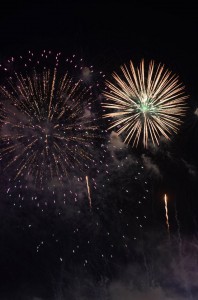 The fireworks at the end of the race were incredibly fantastic.  I was so excited that Stewart won that barely any of the photos I took of them came out! 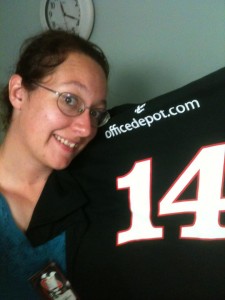 I don’t think I will ever be the kind of fan who watches races on television, but I do fully believe that I’ll go back to another race.  I also know that I’ll try to follow how Stewart does, because I’ll be a #14 fan for life now.

It was a great time, especially because I got to share the experience with my Uncle and Aunt.

This entry was posted in Family and Friends, My Little Life. Bookmark the permalink.