Upward Motion and Other News

I have officially started my new job at the middle school.  I love it.  I’m lucky because I have a co-counselor at this school, and not only is she clearly awesome at being a counselor… she’s also super awesome at sharing and helping and making my transition easier.  The last week and a half has been very full of new student enrollment, which is my responsibility.  My co-counselor has been so helpful and flexible and understanding of the moments that I’ve not known what to do!  We’re hoping to spend some time this week planning our guidance curriculum for the year.  The very exciting thing for me is that the elementary school I was at feeds into the school I’m at now, so Open House included a lot of kids and parents excited to see me!  One student in particular made me cry because they were so happy to see me.

I’m very thankful for my co-counselor for another reason; she has gone out of her way to include me in her group of friends.  Last night she had a get together at her house and she invited me.  It was a great time and I was able to get to know several of my new coworkers much better.  I was nervous on the way there, because I’m the “new kid”.  I left feeling very positive that this move is going to be super good for me and that I’m definitely going to make a lot of great friends working at this school.

I still do miss the comfort level I had at the elementary school.  I was there for 5 years, so I was very familiar with everything that needed to be done and all the people.  Plus, I had a great many friends that made every day better.  Thankfully I still see most of them every month to hang out.  Leaving my comfort zone has been challenging, but I’m very glad I did it.  I truly think I’m going to love working at the middle school level.

In other news of new things, I met with an awesome tattoo artist at Blue Flame Tattoo on Friday.  I had originally planned to meet with Christy last year, but had to cancel my consultation appointment for various reasons.  About a month and a half ago I contacted her again and she told me that she was booked for consults until January.  I was so disappointed!  Several weeks later she sent me an email and said that she’d decided to book some more consultations and wondered if I was still interested!  Of course I was.  I was early for my appointment, but it gave me a chance to check out the shop.  I was very impressed with the whole place… very clean, the vibe was cool.  They had books on display in the waiting area showcasing all of their artists’ work.  I only waited a couple minutes before I was shown back to Christy.  I instantly liked her.  I brought my reference artwork and we talked about ideas and thoughts.  I have wanted this tattoo for awhile, but knew that since it’s going to be based off a watercolor painting there would be some changes.  This is the painting I’ve thought of getting most… 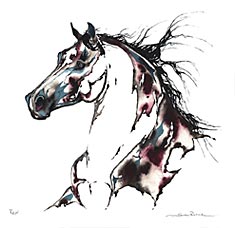 His name is Rojo and I’ve loved him since the first time I saw him.  I had wondered if getting just a horse head like this would end up leaving my back feeling disjointed.  I already have two smaller pieces on my back (the kanji I got with Jake, and a ladybug on a daisy), and I thought having just a third smaller piece would look really odd.  Christy and I talked about it and she agreed.  I had also brought other images… 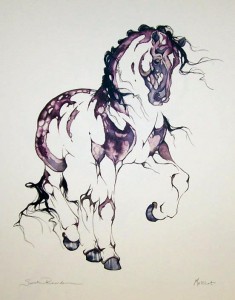 This is Merlot, one of my other favorites.

Iberia.  I love his stance, but not necessarily the colors.

I had one other with me, but I can’t remember which.  I do know it was a horse just trotting.  As we talked I found that Christy and I agreed about the horse head vs. whole horse issue.  She had me show her my other two tattoos and she said that while she could go with just the head it would end up looking really disjointed.  So we talked some more and decided to definitely do the full horse.  She had some fabulous ideas about placement and how to make the horse really fit on my back and look perfect.  She’s going to use my reference art as a starting point and create a combination of horses.  We decided we both like the coloring of Merlot the best, especially for a tattoo.

My sitting isn’t until January 12th, which is a huge bummer.  She said that if she gets a cancelation prior to that she will call me and see if I can come in.  Also, Jake has offered to give me one of his sittings with her if he doesn’t end up needing it to finish the amazing sleeve she’s doing on him.  So there’s a chance I could get in there November or December.  Christy estimated it’ll take about 3-4 hours for the piece, but said that since there’s so much negative space in the tattoo it may take less time.  I am so excited to get this work done.  I know that she’s going to do something truly amazing and I can’t wait to see it!

This entry was posted in My Little Life, Work. Bookmark the permalink.