Last weekend was my dressage show.  It turned out being a very small, relaxed even… because only members of my barn came!  I rode against two other adults, one of them the assistant trainer at my farm.  I was a little nervous about my Intro C test, because of the canter work.

As it turns out, I had little to be concerned about. 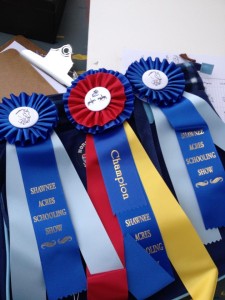 I placed first in both of my classes, earning me the adult high point for the day.  I had set a goal to score above a 5 on some of my movements.  In a dressage test you have a list of things you must do, in a certain order.  The judge scores you on how well these things are done, out of 10.  Since it was my first dressage show, I figured a 5.5 or 6 on some things would really be a good starting point.  At the end of the show you get your test back, with the judges scores and comments.  I was quite shocked when I saw my first test and had nothing lower than a 6.5!  This is a solid score, and there were a lot of 7s as well. 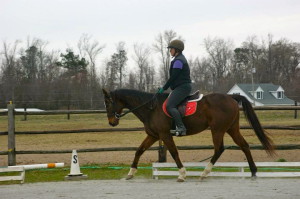 This was taken during my first test.  Austin is on the bit, and round… and quite honestly I look pretty darn great.  I need to relax my elbows a little bit, but otherwise we looked like superstars. 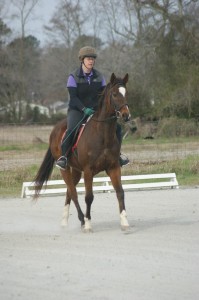 This was the beginning of the first test.  He was very excited to come see the judge! 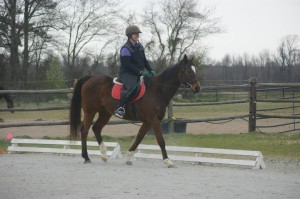 This is midway through our second test.  You can see I’m smiling, because he was like “screw this dressage stuff”.

Our second test included cantering, which didn’t go terribly, but I did score some 5 and 5.5 in that test.  The judge was very complimentary though and said that we were a “very capable pair” and just needed to work on bending at the canter and on Austin accepting contact (aka- accepting the reins being tighter).  The really awesome thing about our second test is that we scored an 8 on one of our movements, which I wouldn’t have expected in a billion years.

It was a very successful day, and I know that the Intro C test that I did is where I need to stay until I start getting some higher scores on my canter work.  I also have decided I kind of liked the dressage test and had a lot of fun doing it!  My trainer is now calling me the “dressage queen”!

I’m hoping to start riding her horse Jimmy soon.  He’s been out of commission with a leg injury since before Christmas, but he’s better now.  She’s said I can try him and see what I think, and if I like him I can start competing on him.  It would be really great… not that I don’t love Austin.  He’s taken such good care of me and has helped me be incredibly successful.  However, Jimmy is bigger (17 hands) which I will look better on, and he is also a little more capable of doing some of the things I would like to do as I progress.

I’ve loved getting back into things.  It occurred to me the other night that I’ve only been back at this since November.  In four months I’ve competed in several shows and I have a wall full of ribbons to show for it.  I’m having a great time.  I have so many photos of myself doing something I love so much, thanks to the awesome parents of my fellow show team members… and my trainer!  I’m having a really fabulous time.

This entry was posted in Horseback Riding. Bookmark the permalink.