In April I found a saddle on line, a PJ Original.  PJs are one of the best saddles you can buy, and even though this was an older model original it was in great shape.  The seller had simply said, “Make an offer.” So I did, never expecting the offer to be taken.  When it was, I was so thrilled, especially since she was willing to take payments.  I made one payment in April, one in June, and one in July.  I began planning buying stirrups and leathers, along with a saddle case and a nameplate.  I’ve wanted a saddle my whole life, and I was so excited that I was finally going to own one.  Not to mention, a gorgeous PJ.

The seller was going through some crazy personal things.  We are friends on FB and several other social network sites.  She sent me a message telling me that she was having her mom put the saddle in the mail due to her own inability to go out (a stalking situation).  That day she sent me a photo of the receipt that gave the tracking info.  I was so pumped.  I tracked the package all week, and on the 27th I was super excited that it showed on line that the saddle had been delivered.

But when I got home there was no package.

I called the postal service and spoke to a rep.  He said it was possible it was just an issue of a mis-scan.  The next day the post master here in my town called me and said that he was tracking down the box and would call me back.  When he did I was very upset to hear that he had found the box, at the public library.  He said he was going to send the carrier the next day to see what he could find out.  The news was not good.  The box was definitely the package that had been sent from the seller’s mom, but it was clearly and purposefully addressed to the public library.  More disturbing?  The box was full of books.  The post master told me that this was a new scam he was seeing more of.  Someone will buy something on line and the seller will send it to a public place (a library, a mcdonalds, etc) in the buyer’s town.  Then they have “proof” of sending and that it was delivered, but they never send the item and have the money.

I was furious.  I contacted the seller and told her what had happened.  She seemed just as shocked as I was, but I was incredibly skeptical.  She said she was on her way to her mom’s house to figure out what was going on.  Soon after I got a message that had a picture of the box with my address on it, and the saddle sitting inside.  She explained that her mom had just decided not to send the saddle, so she wouldn’t have to give it up.  She promised me that she would send it the next day, with insurance and sign on delivery.  I told her I would start to feel better when I had the saddle.

She was true to her word about sending it the next day.  She sent photos of the insurance receipt, the shipping receipt and a “confirmation of sending” receipt.  I began tracking, and every day she contacted me to say that she had noticed that it had arrived in whatever post office it stopped at.  I had to go to the post office to pick it up when it arrived, because it was a sign on delivery package.  The postal workers asked me to open it in front of them; apparently this kind of postal drama isn’t typical in my small town!  I was astonished and incredibly relieved when I opened the box and found this: 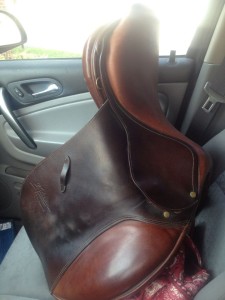 It’s lovely and comfortable (yes I did put it over the arm of the couch and sit in it.  Don’t judge me!).  I need to find a reasonably priced pair of leathers and stirrups, and I need my saddle case and a name plate.  But it’s gorgeous and I love it.  I can’t wait to use it.

This entry was posted in Horseback Riding. Bookmark the permalink.