It’s been a busy few weeks.  Busy but relatively good.  I rode in a clinic with Verne Batchelder again early in October and had a great experience.  It was a good prep for a dressage show that I was planning to ride in.  I had another lesson with my trainer right before the show and it went absolutely awesome.  We went to the show and had a pretty bumpy first test; Austin was absolutely terrified of the judge’s stand.  The way the ring is set up, the judge’s stand is set on the edge of a large hill so it looks very scary.  There are horse pastures down below, so there are things that are moving.  It’s just a scary situation.  When we went in, he flipped out and I very nearly came off.  It threw me off my A-game, which was incredibly frustrating because we had looked so good warming up.  We did better on our second test.  They pinned the first class and I was super bummed because I got 4th place.  There were only 5 in the class so it was disappointing.  I was feeling like I’d blown it for the day.  I was surprised though when I found that I pinned first in my second test (the test I had actually hoped to do better on)!  There were four in my class.  I was absolutely flabbergasted when they announced high points for the day and I was reserve champion! 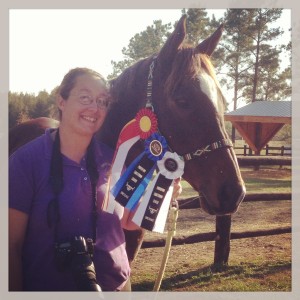 While I’m still disappointed about our Into B test, I’m very proud of us for getting it together and managing to pull out a reserve champion for the day.

Last weekend I went on a road trip with two friends from work to South Carolina.  My friend Stacey has recently reconnected with a friend from college and she was nervous to go see him.  I was all for a trip, and totally excited to experience Charleston, which is on my bucket list.  It was also a great excuse to spend time with two good friends, Stacey and Angie.

For whatever reason none of the photos of us from the trip will upload.  Suffice to say we had a great time and there were lots of photos that showed us smiling and enjoying ourselves.  We are definitely planning another trip sometime soon.  I’m hoping we can go for a long weekend, simply so we will have more time to see everything in Charleston.  I would definitely like to see the aquarium.

I’m very much looking forward to going to the Trans Siberian Orchestra concert next week with Sean.  He is best friends with one of the husbands of one of the barn moms.  I met him recently on my trip to the Conservators Center.  He volunteers there a couple of days a week and made a special trip on the day Stacey and I went.  It was a great day.  I’ve wanted to see Trans Siberian Orchestra for a long time, so I know I’ll have a fantastic time.

Beyond that, I can’t wait until Thanksgiving break.  I’ll be doing a photo safari at the Conservators Center, and I’ll be enjoying Thanksgiving dinner with my trainer and her father.  I’ll be staying at the farm the weekend before Thanksgiving to take care of everything while Carrie is out of town.

Lots of good things on the horizon.

This entry was posted in Horseback Riding, My Little Life. Bookmark the permalink.