Yesterday I was on my way to Medoc Mountain State Park in northern North Carolina.  We were about an hour and a half into our journey when I got a text message from my friend Tracey that simply said, “Princess is in a ditch and can’t get up.”

Princess is the huge Percheron mare that belongs to Tracey’s husband Jim.  In the last four years we have often jokingly called her “our mare”.  Ever since my first visit to their farm, I have had a close bond with her.  She was my trail riding buddy until she was unable to go.  When I first got the news about cancer, she was the one I went to.  She stood by me and let me cry, my face pressed against her giant forehead.  She has been my friend, one of my best friends, for years.

I told Tracey where I was and she said she understood that I couldn’t get to the farm just then.  She promised to keep me posted.  I had no service in the park while we were on the hike.  Afterwards, I checked in and Tracey told me that Princess was fading… that it was not looking good.  The friend I was with and I decided to go to an antique shop and then lunch… and while we were at the antique shop I got the news.

I went to the farm after we got home from our trip.  I wanted to see her before she was buried, and thankfully I made it in time.  Tracey’s husband Jim had been dealing all day with the situation basically alone (with neighbors and phone calls from Tracey).  It was an incredible relief for me to be with him, because I know he is the only other person who fully understands how difficult it is to lose her.  We walked to the barn together and I was able to say goodbye to my sweet mare.  She had died underneath the branches of a dogwood tree.  Jim and I stood by while they buried her, telling our favorite stories about her.  And then she was gone.

I miss her already. 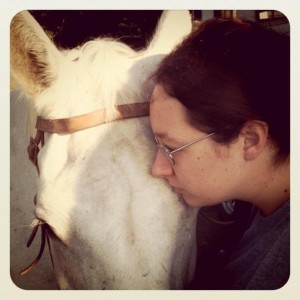 This entry was posted in Family and Friends, Horseback Riding. Bookmark the permalink.